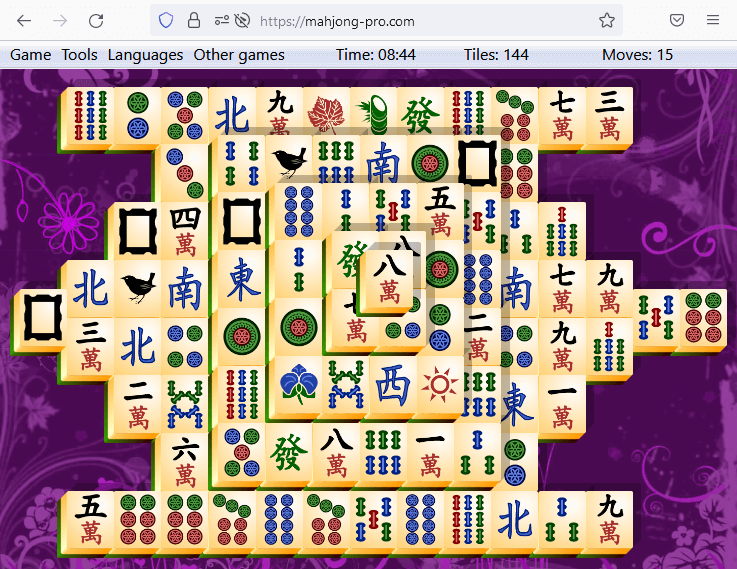 The objective of a Mahjong Solitaire game is to remove all tiles from the board. Tiles can be removed only in pairs, as long as both tiles belong to the same class. Moreover, only available tiles can be removed. If a given tile is covered by another tile or blocked both from left and right, it is unavailable and cannot be removed. In other words, available tiles are those which can slide left or right without moving other tiles in the meantime.

Three pieces of advice for beginners: 1) pay attention to the board and try to unlock those tiles that you will need. 2) If you notice two tiles belonging to the same class on top of each other, prioritize removing the top tile of this pair – if you remove the remaining two tiles from this class first, you will get stuck and the game will be lost. 3) Try to maximize the number of available tiles. If you have a choice of removing a tile standing free or a tile blocking others, you should choose the latter.

Mahjong Solitaire is a video game known also under the name of Shanghai or simply Mahjong. The tiles used in the game come from an ancient Chinese game with the same name (Mahjong) played by four players. The single-player version of Mahjong can be played both on a computer and with the real tiles, however the former way of playing is much more popular.

The first computer version of the game was created in 1981. However, the popularity of Mahjong Solitaire comes from a version developed by Activision studio in 1986 under the name Shanghai. The game is also available in the Windows 7 system under the name Mahjong Titans. You can get Microsoft Mahjong from the Microsoft Store.

This free online Mahjong game was created for users who do not have the game pre-installed on their computers. :-)

In the traditional difficulty level, tiles are always dealt randomly. As a result, some deals can never be won. For example, if four tiles of the same class lay on top of each other, they block each other and the deal cannot be solved.

FluffyStuff glyphs have been created by FluffyStuff and are available under the Creative Commons license.

If you want, you can also read more about traditional Mahjong or check out our tutorial on how to play Mahjong Solitaire.

You can send us an email at contact@mahjong-pro.com. Any question, complaints, thanks or comments are welcome.

This game was created by Simiade company. Here is how you can contact us: